Home / About Us / Harold Kierscht 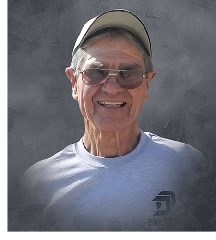 Harold P. Kierscht April 4, 1937 – September 6, 2022 Harold P. Kierscht was born on April 4, 1937 in Logan, Iowa, the son of Harry and Hazel (Basch) Kierscht. He graduated from Logan High School with the Class of 1955 where he was proud of having played varsity football all four years. On September 23, 1961, Harold was united in marriage to Connie Jean Marcum at the First Christian Church in Logan, Iowa. To this union, they were blessed with four children: Kerry, Shawn, Jennifer, and Larissa. After graduating high school, he was working at Seeley’s Gas Station in Logan when a gentleman from Omaha pulled up and said, “You look like a strong young man, have you ever heard of drywalling? It is replacing plaster.” Harold was hired and moved to Omaha, NE where he began learning the drywall trade. It was during this time that he was introduced to his future wife, a young school teacher Connie Marcum, at a friend’s wedding. A few months later, Harold picked up Connie for their first date in his brand new Galaxy Starliner and within six months they were married and made their home in Omaha. A few years later they welcomed their first child, son Kerry. Soon the couple decided they wanted to start their own drywall company in a smaller community. In 1964 Denison, Iowa was chosen for the location and the ambitious 27-year-old, with his expectant wife and one-year-old son, moved and began their new life. Drywall was a new trade, but Harold quickly became known as one of the best in the industry, always saying that his goal was to keep the quality in the craft. The young family soon grew to include three more children, Shawn, Jennifer and Larissa. Those years were very busy as the young couple raised their family while simultaneously expanding Denison Drywall to branch offices in Jefferson and eventually in Spencer, IA. Harold found time and enjoyed coaching flag football and baseball, going to Iowa State football games with family and friends, and fishing trips to North Dakota and Canada. He loved spending Saturday mornings at the Denison sale barn. One of his favorite places was the timber at his childhood farm, where he would cut wood and continue the never-ending battle against the Honey Locust trees. He looked forward to every Father’s Day where he would spend the day in the timber with his family. He had a strong work ethic, and when he saw someone willing to put forth effort, he was there to help them. As his children began their lives with remodeling and building projects of their own, he was beside them, showing them how to make their dreams come true. Harold enjoyed spending time with his grandchildren and great-grandchildren and they adored him. Harold passed away peacefully, surrounded by his loving family on Tuesday, September 6, 2022 at Gracewell Eventide Lutheran Home in Denison, attaining the age of eighty-five years, five months, and two days. He was preceded in death by his parents; and brothers Kenneth Kierscht and Lloyd Kierscht. He is survived by his loving wife of 61 years, Connie Kierscht of Denison; children: Kerry Kierscht and his wife Jill of Denison; Shawn Kierscht and his wife Marie-Louise of Spencer; Jennifer and her husband Rodney Williams of Tabor; and Larissa Kierscht of Tabor; grandchildren: Justin Williams and his wife Kristin of Tabor; Chelsey and her husband Mike Zimmerman of Tabor; Nicolas Williams and his fiancée Haley Rust of Tabor; Kole Kierscht of Denison; Shae Kierscht and her special friend Joe Poggensee of Denison; Macy Williams of Maryville, Missouri; Otis Kierscht of Spencer; William Trabal of Tabor; Owen Kierscht of Spencer; Jozefin Kierscht of Spencer; and Megan Neumann of Tabor; great-grandchildren: Broden, Grady, Beau, Eli, Hudson, Rhett, Coy, and Jayda; other relatives and friends. He was a faithful member of Our Savior Lutheran Church in Denison, Iowa. Funeral Services were held 10:30 A.M., Monday, September 12, 2022, at Our Savior Lutheran Church in Denison, Iowa. Rev. Chad Trunkhill officiated the service with interment in Crawford Heights Memory Gardens in Denison. Organist Mary Kuhlmann provided accompaniment for congregational hymns “On Eagle’s Wings” and “The Old Rugged Cross.” Guitarist and soloist Macy Williams sang “Amazing Grace” and “Grandpa.” Annette Gross and Katja Ambrose served as guest book attendees, Joyce Klein, Chelsey Zimmerman, Kristin Williams, Megan Neumann, Shae Kierscht, Haley Rust, Macy Williams and Jozefin Kierscht served as the flower committee. Serving as honorary pallbearers were Gordy Wiebers, Bob Rounds, Stan Kracht, Jim O’Neill, Fred Divelbess, Russell Klein, and all past and present employees of Denison Drywall. Serving as pallbearers were Harold’s Grandson’s: Justin Williams, Michael Zimmerman, Nicolas Williams, Kole Kierscht, Otis Kierscht, William Trabal and Owen Kierscht. Following the burial, the family invited everyone to return to the church for a time of fellowship and lunch catered by Lidderdale Country Store. The Huebner Funeral Home in Denison was in charge of arrangements.

A trusted contractor and supplier since 1964.Contact us today!